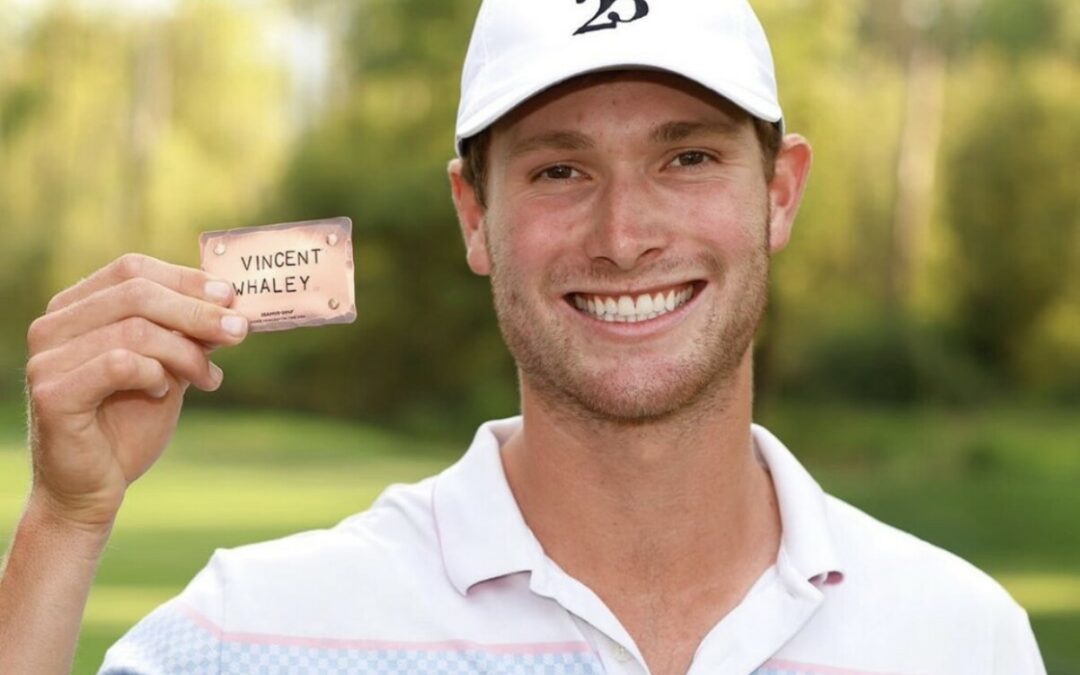 Since turning pro in 2017, Vincent Whaley has seen a lot of success on the golf course.  In 2018, Whaley finished fourth on the All Pro Tour money list with 12 top 25 finishes, six of which were top 10’s, one third place, and two second place finishes in his first full season as a pro.

Here, Whaley tells us about his journey from college golf at Georgia Tech to the Korn Ferry Tour, how his success on the APT shaped the future, and his goals going forward for the 2020 season.

Looking back from 2017, are you happy with what you’ve accomplished in such a short time since turning pro?

“I’m very happy with what I’ve accomplished so far.  I kind of had a rough end to my college career, so I didn’t even know if I wanted to pursue professional golf because I wasn’t sure if I was going to be good enough, but thankfully I’ve continued to get better and better.”

What was your thought process in choosing to play a season on the APT in 2018, why not other mini tours?

I played one in 2017 and I had a great time in that.  I’m really good friends with Derek Oland and Zack Cabra, we actually played on the same high school golf team, and they played out there.  Derek was killing the tour, was making some pretty good money, and the competition was good.  He talked really highly about it and I thought I’d give it a shot, plus they’re around the Monday qualifiers so it just made sense to me.”

Did you have a favorite stop while on the APT?

“Bogey Hills was probably my favorite.  I thought Bogey Hills and Texarkana were the two best golf courses, also have to put Muskogee up there too.  I did private housing at all three of those and had really good families at all three.”

How did your experience on the APT help you going through Q-School and your rookie season on the Korn Ferry Tour?

“I talked my swing coach before the year started and you know some people play professional golf for the money, my one goal was to make it to the Web.com Tour, now the Korn Ferry Tour.  We approached every single tournament like it was second stage, no matter what was going on with your swing you just had to finish in the top 25.  It’s similar competition between first and second stage to an APT event so we treated it like that.”

Having gone through both, gaining your Korn Ferry status and getting your PGA TOUR card, which was personally more difficult?

“Q-School is just such a do or die, I think there’s a little more pressure. Especially at final stage.  On the other side Korn Ferry is obviously loaded with a ton of talent.  The way the points system is structured you have to have top 5’s and top 10’s to get your card, there’s no other way to do it.  It’s so top heavy points wise your not going to be able to fake your way into the 25.  You got to have some really good finishes.  They’re pretty equal in difficulty, but in different ways.”

How did your success on the APT transition to the KFT?

“Until you get out there it’s tough to really know. What’s true is that good golf plays anywhere.  If you’re playing good golf on the APT and you’re finishing in the top 5, I promise you that’s good enough to go get a top 5 on the Korn Ferry Tour.  Your good golf is good golf no matter what.  I feel like your bad golf is what tour you end up on.  I knew I played well that entire year on the APT and didn’t change anything and just kept it rolling I knew it was good enough.”

Were there any similarities between a week on the APT and the KFT?

“It’s honestly same stuff just a different day.  It’s another tournament where you’ve got the same group of guys you’ve been around for the entire season.  It’s not a whole lot different when comparing the two.”

What keeps you motivated?

“I feel like I was never really that good. I just wasn’t ever that guy, like those guys coming out of college that are these superstars that played in all the Walker Cup’s and everything and I was definitely not apart of that crowd.  I get lumped into that group because I’m kind of young, but I definitely wasn’t.  I just want to prove that I’m good enough and I really want to see how good I can be is the main thing.”

“It’s been awhile since I’ve been in contention right now.  I miss the feeling, it’s so contagious.  There’s no feeling like it in the world and I’m a little annoyed I haven’t had that feeling in awhile and I want to get back to that as soon as possible.”