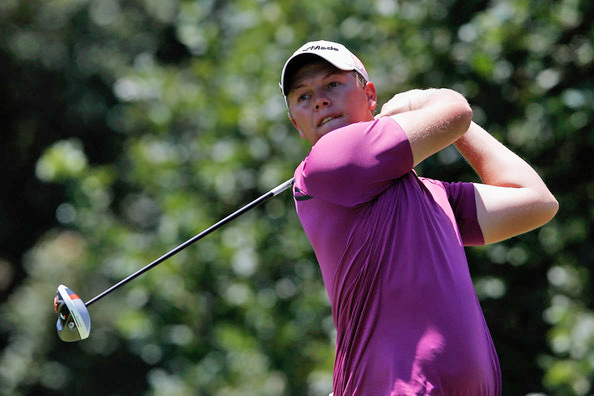 (Dallas, TX) After years spent bouncing around various Tours around the world, MJ Daffue’s persistence is beginning to pay dividends.

Growing up in South Africa, a hotbed of young golfing talent, Daffue spent his junior career vying for titles with the likes of Dylan Fritelli and Erik Van Rooyen. Daffue’s victory at the 2007 SA Boys U/19 Championship underlined his immense potential. All three enjoyed successful collegiate careers. MJ, for his part, earned Southland Conference Player of The Year honors while at Lamar University. It was once they joined the pro ranks, however, that their paths diverged drastically.

While his peers tasted success in Europe and the States, Daffue struggled to find his place in the professional golf universe. South Africa’s Sunshine Tour, the Hooters Tour and the All Pro Tour are just three avenues Daffue explored in an effort to gain experience and make ends meet.

Whoever you are and wherever you’re from, it’s only natural to compare yourself to your friends. MJ admits that, while he was struggling he fell into the trap of comparing his results to those of his childhood competitors.

“I grew up with George Coetzee, Erik Van Rooyen and Dylan Fritelli. Furthermore, Zander Lombard and Christiaan Bezuidenhout went to my high school,” he says.  “So there were just all of these good players and when you’re not doing well and these guys are finding success I think my biggest downfall was comparing myself to them.”

The tragic loss of his mother-in-law in 2014 was incredibly difficult for MJ and precipitated a period of prolonged struggle. As he and his wife dealt with their grief and moving houses, Daffue volunteered as a coach at the University of Houston which proved a welcome tonic.

“It kind of gave me a good sense of purpose. I was missing that, at that stage, I was struggling with depression,” Daffue explains.  “I was like my life is not fun, I’m meant for more and look where I’m struggling.”

Yet the tide was still a ways from turning on the course. A quadruple bogey during the Second Stage of Korn Ferry Tour Q-school resulted in Daffue missing out on qualification for final stage by a single shot.

Nevertheless, he persisted. A coaching switch brought about a change in fortunes as MJ earned conditional status for the 2019 season. His results on the secondary circuit were mixed: Three Top-25 finishes in nine starts was only good enough for 112th on the The 25 standings. Yet it’s worth noting that on 10 occasions at Monday qualifiers that season, Daffue missed out either by a shot or in a playoff.

Staggering still is the way in which Daffue’s 2019 season ended. Missed cuts in his final two events, by a single shot on both occasions, sent the South African back to Q-school to try to regain his status. Lo and behold, it was the same course and very same hole that proved his undoing once more. A triple bogey this time around saw him miss out on final stage qualification by just two shots. Once again Daffue had no status of any kind on the Korn Ferry. One step forward, two steps back…

Yet amid the apparent gloom there was reason to remain upbeat. In his last eight starts on the All Pro Tour since August 2019, the 31-year-old has four runners-up to his name and hasn’t finished outside the top-6. Daffue praised the depth of talent on the All Pro Tour and it’s reputation for producing great players.

“The level of competition is good. You see the players that come out of there: Scottie Scheffler, Cody Gribble, there’s a lot of people that have played that Tour,” says Daffue.  “There are so many good players on these mini tours, it’s crazy.”

Golf is a game of numbers and Daffue’s numbers have been staggering of late. By his own estimation, he’s shot 66 or better 30 times in the past 20 months. Moreover, his competitive stroke average since the start of 2019 is 69.05.

Daffue explained the integral role his coach played in keeping his spirits up while he waited for a breakthrough of some sort.

“My coach said ’If you keep putting 67 or 66 on the board, eventually it will be good enough’. I was never discouraged because I knew that it was just a matter of opportunity.”

When his opportunity eventually arrived, it did so in spectacular fashion. A 63 which included nine birdies and an eagle in the Monday Qualifier at the Workday Charity Open in July 2020 earned Daffue a deserved second-ever PGA Tour start.

The Pretoria native seized his chance with both hands, firing rounds of 73-69-65-73 to finish T-22 and pocket a check that eclipsed his career-earnings on the Korn Ferry Tour by $18,742!

Since his showing at Muirfield village, Daffue has continued his upward trajectory. A T-12 effort at the Sanderson Farms Championship via a Monday qualifier (his ninth success in his past 14 attempts) means that he needs 227 further FedexCup points to gain special temporary PGA Tour membership for the remainder of the season.

With six sponsors’ invites still at his disposal and the realistic chance of the odd Monday success here and there, MJ has every chance of changing the path of his life and career.

“I’m enjoying what I’m doing. I know I’m good enough for the PGA Tour, but you have to put the steps in,” Daffue says. “I’m exactly where I want to be, so it’s awesome.”

With positive results to complement his positive attitude, it surely won’t be long before the name MJ Daffue is mentioned in the same conversation as the names Van Rooyen and Fritelli once again.