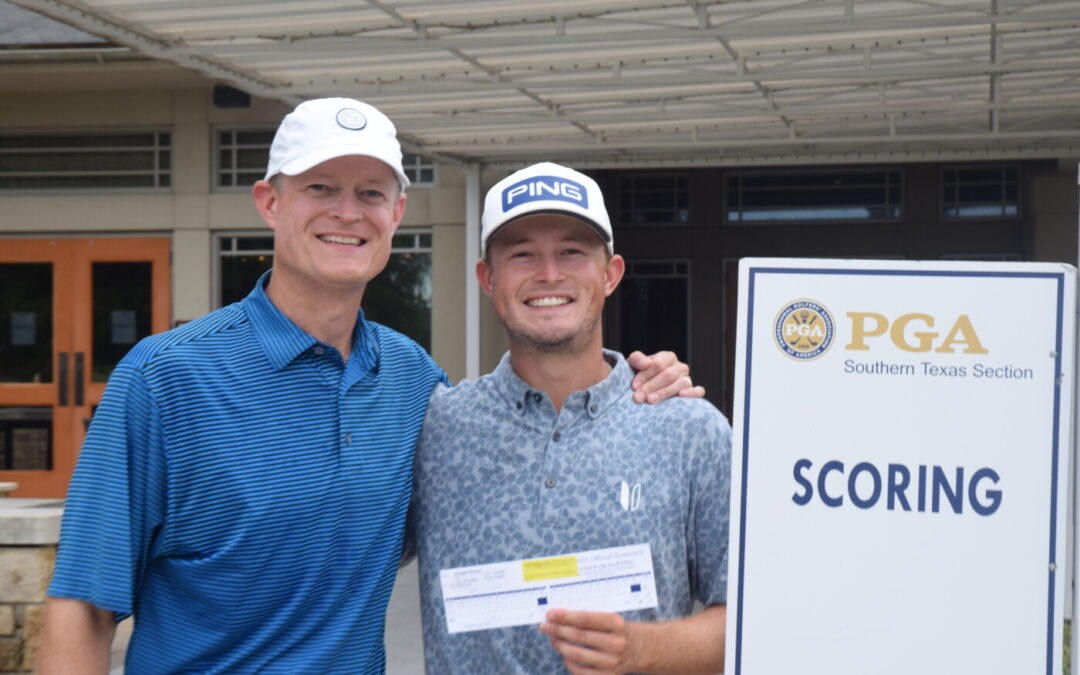 Cooper Dossey gets his first professional win in Texas at first stage of Korn Ferry Tour Qualifying School.
Not only did Dossey take the win, he scored an impressive 59 on his second round. With his dad on the bag, Dossey posted 68 | 71 | 59 | 68 (-22).

Paul Dossey, Cooper’s dad, reflects back on the unforgettable week:

“When Cooper asked me to caddy for him I honestly was very nervous about it.  I knew the importance so I actually demanded that I caddy at least one pro tournament which was the last APT event.  That week did not go our way and I left there concerned to be honest about Q school for Cooper.  He knew he needed to go to work and he did just that because when we played the 1st Stage practice round on Sunday afternoon he was really swinging it well and had the speed of the greens.  The weather did not cooperate and when the first tournament round was cancelled we drove straight to Austin to practice and play some holes at UT Golf Club.  As a Dad you naturally want the best for your kids but you can’t do it for them. I can only support them the best I can.  In fact, when I caddy I try my best to just be a caddy not a Dad.  We built a plan for the course and after the first round we opened with a solid 4 under after the first 18.  The afternoon 9 holes for round 2 the putts just started to drop.  He finished 6 under and we just wanted to keep playing.  The next morning we started the round and the focus he had on the range and the putting green was eerily like the previous day as if we never left the course, ate dinner and went to sleep.  As the putts started to fall again and again I just kept recording the birdies and not really thinking about 59 only that we were moving in a great direction for what we came there to achieve.  After he chipped in for birdie on 17 he said to me “now we just need a 3 on 18” and that is when it hit me and that is when I just told him to breathe.  There is a long walk between 17 and 18 and I kept telling him to breathe in through your nose and out through your mouth.  That walk seemed like an eternity to the 18th tee box.  He hit a perfect tee shot and we started to walk again focusing on breathing and trying to keep him in the moment and focused on the next shot.  For the 2nd shot we had around 280 and he hit a perfect shot just like we planned and we saw it land not too far from the flag…fist bump and walk to see it is 20 feet and sitting on the fringe.  For two days I have not been reading any putts for him and he walks past me and asks me to take a look at this one and I said “I don’t know what you want me to read anything you have been making everything you look at on your own.”  I just looked at the line he had picked out and said “you got this”.  In my head I am still rationalizing what the putt was for and just not wanting to see it lip out.  I looked across the green at James Ross, our playing partner, and his eyes met my eyes like this is a really big putt.  Cooper rolls it perfectly and it dies dead in the bottom of the hole and I am still in shock.  I don’t remember the fist pump after the putt dropped that is in the video, I only remember the hug and embrace and then double checking with him that he just shot 59.  We lost a lot of energy from all the adrenaline and that 3rd round in the afternoon was challenging and long but we just tried to keep to our game plan and keep giving ourselves opportunities.  The final round we wanted to play bogey free and get the win.  We knew this was a strong field coming into the week and to come out on top with a birdie on the final hole to win his first professional event is a great asset heading into the next stage.  As a caddy plotting our way around the course this week and having that front row seat to the 59 and winning made for a great week.  As a Dad seeing your son perform like he did after putting in all the hard work to prepare and then accomplish the goal it just makes you so proud and I feel very blessed.”